Installation, 2011
In cooperation with Jonas Hansen 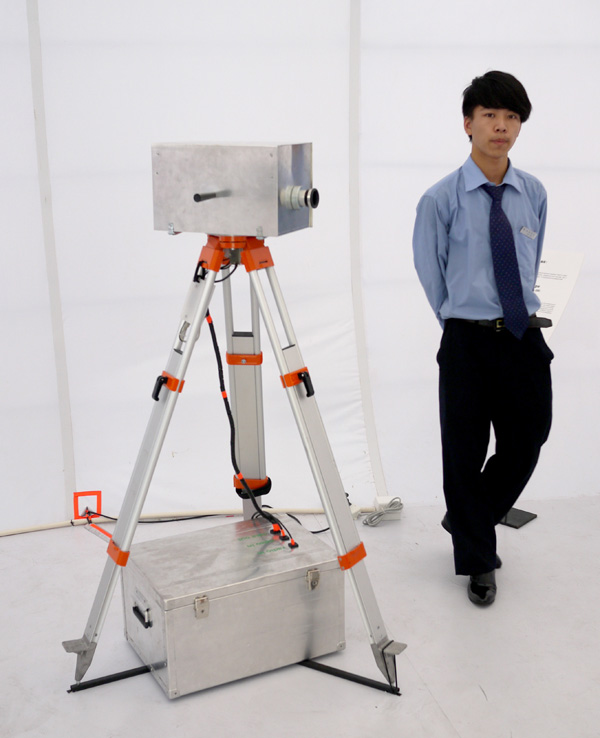 The Solar Wind Periscope is an artis­tic instru­ment visu­al­iz­ing atmos­pheric con­di­tions that depend on space weather. It uses a radio receiver to mea­sure HF radio sig­nal range and relies upon a global net­work of ama­teur HAM-radio sta­tions known as WSPR­net. It was devel­oped for The Weather Tun­nel Project at Translife Tri­en­nial 2011 and is part of an ongo­ing inquiry into weather beyond earth.

Space weather, mainly in form of the solar wind or heliosphere, constantly affects earth’s atmosphere. A solar flux of particles collides with atmospheric gas atoms creating an ionized layer at the border between earth and space. Depending on the solar wind and the ionization caused by it, this layer can both reflect or absorb high frequency (HF) electromagnetic waves. Radio signals may use this reflecting layer in order to reach places normally occluded by the curvature of the earth – a process named skywave propagation. In turn, the range of a HF radio signal is determined by the reflection and absorption of this layer and thus becomes a correlate of the ionization by the solar wind. Because of this, by measuring radio signal range a terrestrial radio station can serve as a weather station for extraterrestrial weather.

The Solar Wind Periscope is a periscope connecting its visible surroundings with invisible space weather which becomes accessible through an antenna. A HAM radio receiver constantly monitors low-power HF radio signals stemming from a global network of radio transmitters called WSPRnet (pron.: whisper net). Through WSPRnet , the radio receiver monitors which nodes of the global transmitter network currently are reaching it, indicating their respective range and thus ionospheric conditions.

Looking through the periscope, the surroundings of the periscope (or the room it is placed in) can be seen. Using the Pepper’s Ghost Effect, this image is augmented by a direction-dependent visualization of radio signal range and therewith the solar wind and its current effect on the ionosphere of the earth. While the current version of the instrument uses a camera whose movement is synchronized with moving the periscope, a camera-free analog version of the periscope is planned which will make us of optical components only, just as a traditional periscope does. In addition to this visual access to complex phenomena, observers may listen to the signals from WSPRnet and the ambient noise of the aether.